Weird Harold is extremely clumsy. While he's one of the less-intelligent members of the Junkyard Gang, he can be very nice. He tends to be more straight-forward and right to the point when he speaks.

He never got to do a whole lot in the show, but one epsiode briefly gave an addiction to video games, but quickly got that under control, and responsibly made efforts to atone for the trouble it caused..

Weird Harold is a very tall (the tallest member of the Junkyard Gang, even taller than Fat Albert) African-american teenager. Due to Filmation's penchant for stylization, Harold has snake-like pupils, mostly seen in close-up shots.

According to Bill Cosby's standup routines, he was called "Old Weird Harold" because he was over six and a half feet tall yet weighed less that one hundred pound

He wears a yellow dress blazer, a white button-down shirt, blue jeans, socks (one yellow and one red) and white sneakers.

In the film, Weird Harold's snake-like pupils were removed, he has an afro as opposed to his regular hair, green and black plaid pants, and white and green sneakers. 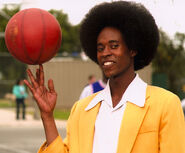 Weird Harold in the film (live-action)
Add a photo to this gallery
Retrieved from "https://fatalbert.fandom.com/wiki/Weird_Harold?oldid=7558"
Community content is available under CC-BY-SA unless otherwise noted.