Wambly is a recurring character in the original series; his only appearances were in the episodes, "Smoke Gets In Your Hair" and "The Shuttered Window."

"Smoke Gets In Your Hair"

At school, Fat Albert catches Wambly in the janitor's closet smoking heavily. Seeing a smoldering cigarette butt on the floor, Fat Albert warns him that he could burn the whole school down, but Wambly ignores him and leaves. Later, when the rest of the Junkyard Gang (and Wambly's younger sister Lotus) see him openly smoking outside, the others, particularly Rudy, eventually get into smoking cigarettes themselves, but Fat Albert is only aggravated.

Later in his bedroom, Wambly is teaching Rudy how to blow smoke rings when Wambly's father barges in and catches them both in the act. Oblivious to the fact that he himself was smoking a cigar at the time, and holding a large ashtray filled with cigar butts, Wambly's father accuses Rudy of getting Wambly hooked on smoking, which Rudy rightly denies.

The downside of all of Wambly's smoking begins to catch up to him as he is developing a bad cough, though he is slow to pick up on why. As he is about to leave to play in a big baseball game, he finds his father is coughing even worse; he tells Wambly he will follow him to the game, and Wambly reluctantly leaves.

Wambly is the last batter up, but just as he steps to the plate he is distracted when he hears his father loudly coughing nearby, which breaks his concentration and he strikes out losing the game. When his father falls to the ground coughing and gasping Wambly runs to his side. Fat Albert suggests calling an ambulance, but Wambly's dad declines and catches his breath. Realizing he is on the brink, and realizing why, Wambly's dad decides to quit smoking right then and there, crushing all of his remaining cigars, and then advises Wambly to do the same, to which he agrees, and father and son both go home.

Wambly briefly appears again in the season 4 episode "The Shuttered Window", in which Undeen's Uncle Monty volunteers himself to perform at a benefit show to raise funds for the school sports program. Wambly is the one who informs Fat Albert and the others that Uncle Monty has suddenly died. 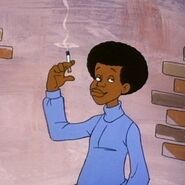 Wambly smoking
Add a photo to this gallery
Retrieved from "https://fatalbert.fandom.com/wiki/Wambly?oldid=8979"
Community content is available under CC-BY-SA unless otherwise noted.