In the show, the Brown Hornet is able to almost effortlessly defeat his adversaries, and in the process teach valuable life lessons to the villain, and also to the viewers which, though initially ambiguous, are remembered and clearly applied to whatever situation Fat Albert or the others are dealing with in each episode.

The Brown Hornet vignette replaced the Junkyard Band songs from the earlier episodes of Fat Albert and the Cosby Kids.

While the Brown Hornet himself did not appear in the movie, a long-sleeved shirt with a graphic of him is seen being worn by Bill throughout the whole movie, as well as a Brown Hornet comic book Bill is seen holding in one scene.

The Brown Hornet was originally inspired by the long-running radio series The Green Hornet. In 1970, Bill Cosby produced a syndicated radio show which borrowed heavily from the Green Hornet series. By the time episodes of the New Fat Albert Show began airing, the name "Brown Hornet" remained, but the character was completely revamped.

The Brown Hornet is an intergalactic superhero. His face is modeled after that of his creator Bill Cosby. He wears a predominantly yellow superhero-style costume (shirt, shorts and boots) with an orange cape, reddish belt, off-white gloves and black domino mask. He travels throughout the cosmos in his barely-functioning spaceship, which is shaped like a giant hornet complete with wings. Hornet is assisted by Tweeterbell, a small robot/computer, and Stinger, his beefy sidekick.

Stinger (voiced by Lou Scheimer) is the Brown Hornet's "trusty pal". He is taller than Hornet, and someone dimwitted, but is almost always at his boss' side to help. Stinger is overweight with a mustache and muttonchop sideburns. His costume is primarily pink (shirt, shorts and boots), except for his red cape and yellow cap. Like the Brown Hornet, Stinger also wears a black domino mask.

Tweeterbell (voiced by Erika Scheimer) is the Brown Hornet's other assistant. Though she resembles a small transistor radio, she is actually an anthropomorphic robot. Tweeterbell is white all over with wheels for feet. She wears a small yellowish-orange cape and an orange knit floppy hat that just loosely sits on top of the corner of her head, and like Stinger and Hornet, she too wears a domino mask. 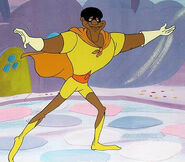 Tweeterbell, The Brown Hornet, and Stinger