Fat Albert Wiki
Register
Don't have an account?
Sign In
Advertisement
in: The Junkyard Gang, Main Characters, Characters,
and 4 more

Rudolph "Rudy" Davis is a member of the Junkyard Gang. He usually serves as the primary source of comic relief and character friction in the series.

In the Junkyard Band, he plays a makeshift banjo, whose parts included a broomstick handle and sewing-thread spool to hold the strings. But when shown playing apart from the others, Rudy played an electric guitar (stylized with a big letter "R"), making him the only member of the band to play a real musical instrument.

Rudy fancied himself a smooth-talking huckster, although his smart-alecky attitude more often got him into trouble than out of it. His cocky and dismissive attitude often served as the catalyst for a typical plot's conflict, but his outward cockiness masked a decent heart, and he usually learned lessons from his mistakes. In the Easter special, case in point, after getting Mudfoot injured because of a prank he was playing on someone else that went awry, Rudy, not telling anyone else, took up a hazardous job in order to help pay off Mudfoot's mounting debts. Another time he expressed sympathy to a girl whose parents were getting a divorce and risked his life to save her from drowning. He even expressed deep remorse over almost getting Russel drowned. He even apologized to him and shed a tear of joy when Russel recovers. When a friend's Uncle who was a magician that the gang liked passes away, Rudy was as devastated and heartbroken as the others. So much so that neither he nor Russel could get into their usual insult match.

Rudy's family is stated to be the most affluent of all the members of the Junkyard Gang, but Rudy never boasted about it, except in the season 1 episode "Creativity", when he first got his new electric guitar and brags about how he's going to become a superstar and make a lot of money. His background is never again brought up on subsequent occasions.

In the 2004 live-action film, Rudy’s personality was different and now acts like a well-mannered, kind-hearted gentleman. This is most likely due to a culmination of his character development over the course of the series. Or inattention on the part of the writers.

Rudy is a slender, teenage African-American boy. He is the sharpest dresser of the Junkyard Gang, always wearing his signature orange scally cap with a pink disco-like outfit.

In the film, his appearance remained mostly unchanged, with the exception of his shoes being pink instead of red like in the original series, as well as his sweater vest being changed from red to purple. 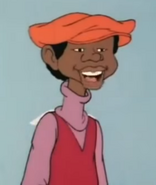 Rudy balancing a potted plant on his head, not impressing Russell

Rudy being unphased while his friends are traumatized

Rudy and Dumb Donald looking at the fence.

Rudy in the film (cartoon)

Rudy in the film (live action)
Community content is available under CC-BY-SA unless otherwise noted.
Advertisement