Fat Albert and the Cosby Kids is an animated series created, produced, and hosted by comedian Bill Cosby, who voices various characters, including the titular character Fat Albert himself. The show aired from 1972 to 1985 with 8 seasons (with 110 episodes) and 3 specials. In 2004, it was adapted

The show features an educational lesson in each episode, emphasized by Cosby's live-action segments. In addition, at the end of the early episodes, the gang typically gathers to play a song on their cobbled-together instruments, summarizing the show's lesson.

The producers wanted NBC to bring Fat Albert to Saturday mornings, but the network programming managers refused because the series was too educational. Bill Cosby and a new production company, Filmation Associates (known for He-Man and the Masters of the Universe and many DC comics cartoons) , then took the property to CBS. Fat Albert and the Junkyard Gang were redesigned by the artist Randy Hollar with the assistance of one-time Disney animator Michelle McKinney, under the direction of Ken Brown.

Re-titled Fat Albert and the Cosby Kids, the series premiered on September 9, 1972, on CBS. Production lasted for 12 years (though not continuous). It also spent Season 8 in first-run syndication (1984–85). Three prime-time holiday specials (Halloween, Christmas, and Easter) were also produced. Like most Saturday morning cartoons of the era, it contained an adult laugh track, which was eliminated during the final season. The series was rerun on NBC Saturday mornings and on the USA Network in 1989.

In 2013, Cosby said the following on his Facebook page: "I’m telling you there are people at work, who I think, will make Fat Albert happen again. And it will be loved by all generations to come.", though no further word has been said yet.

In 1979, the show was re-titled The New Fat Albert Show and featured a new segment of each episode with the Brown Hornet.

In 1984, the show was syndicated and renamed The Adventures of Fat Albert and the Cosby Kids. The lack of network restrictions allowed the producer to delve into more mature subject matter. Another new segment was added, with the new character Legal Eagle. 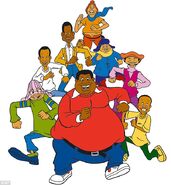 Watch seasons 1-7 on KimCartoon (an official update of KissCartoon)

Retrieved from "https://fatalbert.fandom.com/wiki/Fat_Albert_and_the_Cosby_Kids?oldid=8858"
Community content is available under CC-BY-SA unless otherwise noted.