Fat Albert Wiki
Register
Don't have an account?
Sign In
Advertisement
in: Characters, Heroes, Characters who appeared in the movie,
and 7 more

For the Fat Albert movie, see here. For the TV series, see here.

[~Fat Albert's signature line, often accompanied by a short sentence, the final word of which rhymes with "hey".] And what will he do next?

Fat Albert is the title character and main protagonist of the Fat Albert and the Cosby Kids TV show and the main male protagonist of the movie. He is the heart and soul, and often the conscience, of the Junkyard Gang. In the TV series he is voiced by Bill Cosby himself, and is portrayed by Kenan Thompson in the movie.

Though Fat Albert is depicted as exceptionally obese, he is very active and loves to play sports. He wears a red pullover sweater with a white shirt, bluejeans ,and white sneakers. In the movie, he states that he doesn't know what's underneath his sweater seeing how the animators never drew him without it. Except in the case of Season 1's Episode 1 "Lying" Where the gang went to a swimming pool with their friend Edward to prove that he wasn't capable of swimming. Albert is seen without a shirt on as well as the other Cosby Kids.

Civic-minded and wise beyond his years, Fat Albert works hard to maintain integrity within the gang as well as with others. He never hesitates to go out of his way to help people in need, but also knows when to ask for advice from the adults in his life (particularly his parents or his teacher) if he feels like he is in over his head.

Fat Albert is the lead singer of the Junkyard Band, playing a bagpipe-accordion (made from a funnel, radiator and an airbag), and on occasion plays the bedspring harp, which is normally played by Weird Harold.

The character of Fat Albert was based on Albert Robertson, a real-life childhood friend of Bill Cosby. Fat Albert first appeared in Cosby's 1968 Grammy-winning album Revenge, in which Cosby talks about how he and his friends played a game called "Buck Buck", in which one group of guys, one by one, would run and jump on top of another group of guys bunched together in an attempt to "collapse the horse". Cosby and his gang were challenged by another gang in a Buck Buck match, and at the end they called on the 2,000-pound Fat Albert to collapse their opponents' horse. But at the last second their opponents, seeing Albert for the first time (and not wanting him to land on their backs), concede defeat.

In another story from the same album, Cosby talked about how guys in his neighborhood got their kicks by scaring their friends. One such incident involved a six-foot-tall Frankenstein statue that a group of guys stole and planted on the third floor landing of an apartment building; they would take out all of the lights in the stairwell and replace one over the statue with a pink light bulb, then send one guy into the street to call someone else inside (using a ruse). The victim would follow the caller into the building, the caller would pass the statue and then tap the guy holding it, which was his cue to lean it toward the victim. Frightened, the victim would then, according to Cosby, "kill himself running out of the building". After Cosby himself became a victim of this prank, it was his turn to find another victim, who happened to be Fat Albert, only this time Fat Albert went in the apartment building first with Cosby right behind him prodding him as they made their way up the stairs. As they got to the third-floor landing, the prank was sprung, and Cosby quietly remarked, "I forgot I was behind him".

Fat Albert in the film (cartoon) 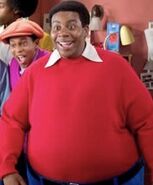 Fat Albert in the film (live-action)
Community content is available under CC-BY-SA unless otherwise noted.
Advertisement